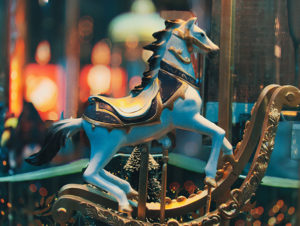 Remember the fun of riding a colorful steed up and down, round and round, listening to the music on a carousel? Why not visit Knoebels unique Carousel Museum in Elysburg, and hear that carousel music again when you stay at The Inn, Farmhouse, and Brewing Co. at Turkey Hill? Knoebels Amusement Resort is located less than a half-hour’s drive from Bloomsburg, PA. The Carousel Museum features over 50 hand-carved carousel figures, plus scenery panels, chariot sides, paper music rolls, and other memorabilia. You’ll take a ride through history as you learn about the history of carousels and their organs dating from 1870 until the recent past. Admission to the Carousel Museum is free.

You’ll find the Grand Carousel in the center of Knoebels Amusement Park. Built in 1913, its 63 horses carved by Charles Carmel and three Looff chariots are four abreast, making it one of the largest carousels in the world. There’s still a chance to catch the brass ring for a free ride! The Grand Carousel is partnered with three organs. The largest, dating from 1888, now plays using a paper rolls system. A smaller organ, built in 1910, still plays original folding cardboard music. The third organ, in the center of the carousel, is a Wilhem Bruder organ that now uses duplex roll system.

The S & G Merry Go Round and S & G Organ are located in Kiddieland. The two-abreast S &G carousel figures were carved by Stein and Goldstein in the early 20th century. Its adjacent organ dates from about 1900 and appeared with Knoebels first carousel in the late 1920s. It was converted to play a duplex paper roll system in 1925. It was unused and fell into disrepair from the 1930s until the 1980s, when it was restored and joined the S & G Merry Go Round in its current location.

Knoebels displays some of its organs only every other year at the Carousel Organ Association of America’s Bi-Annual Rally (June 16-17, 2018). These include:

Photo by JJ Ying on UnSplash