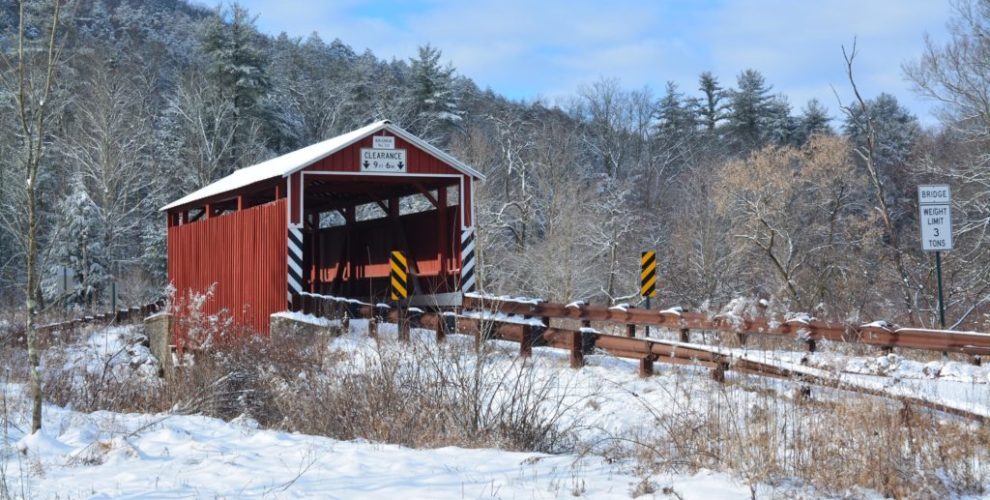 Foliage season is a beautiful time to tour covered bridges near Bloomsburg, PA. The 23 covered bridges in Columbia County and on the Columbia-Northumberland County border, are the third biggest concentration in Pennsylvania. The Inn, Farmhouse, and Brewing Co. at Turkey Hill in Bloomsburg makes a perfect central location for a fall tour of these Columbia County Bridges and the several in adjacent Montour County as well.

To plan your driving tour, the best guide is Covered Bridges of Columbia and Montour Counties Pennsylvania, a downloadable brochure with two suggested tour routes (half the covered bridges on each tour). The brochure includes information about each of the 25 bridges, photos, detailed instructions, and maps. 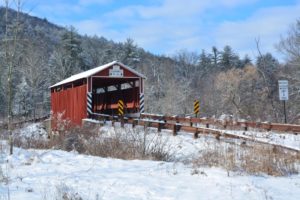 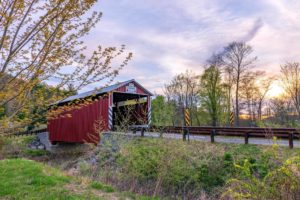 All the covered bridges are invitations to camera buffs, and every year The Columbia-Montour Visitors Bureau holds a Photo Contest to select the covered bridge photo to be featured on their limited-edition puzzle. Winning photos in past years include the East & West Paden Bridges (twice), Rupert Bridge, Stillwater Bridge, Josiah Hess Bridge, Esther Furnace Bridge, Knoebels Bridge, and Keefer Mills Bridge. For 2019, the winner is Paul W. Naus Jr.’s photograph of the Kramer Bridge. Although this is the first time a photo of the Kramer Bridge won the contest, photos of the same bridge also won second and fourth place this year!

You’ll find five of these photogenic bridges on the brochure’s suggested route for bridges north of Bloomsburg. The Kramer Bridge, East and West Paden Bridges, Stillwater Bridge, Josiah Hess Bridge, and Sam Eckman Bridge are included on this self-guided driving tour. The Kramer Bridge, built by C.W. Eves in 1881, crosses Mud Run, a tributary of Green and Fishing Creeks. The bridge, reconstructed in 2007-8, is in excellent condition. (The Columbia County website has a photo gallery of pictures taken before and after the bridge’s reconstruction.) Other bridges on the northern tour include the Wanich Bridge, Shoemaker Bridge, Creasyville Bridge, Patterson Bridge, and Fowlersville Bridge.

A drive through our peaceful Pennsylvania countryside to see its covered bridges is scenic any time of the year; it’s especially pretty during our fall foliage season in October. The northern driving tour suggested in the Covered Bridges of Columbia and Montour Counties Pennsylvania brochure is about a 70 miles round-trip loop from the Inn. You can find the Kramer Covered Bridge on the well-named Turkey Path Road in Orangeville, less than 10 miles from Turkey Hill via PA-487 N and Rohrsburg Road.

The leaves will be turning colors soon, so it’s time to reserve your foliage getaway to Northeastern Pennsylvania at the Inn.