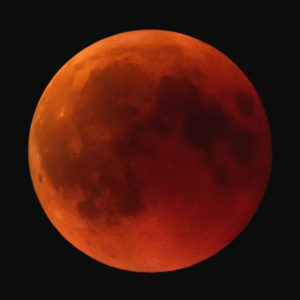 A lunar eclipse happens when the Earth comes between the sun and the moon so that the shadow of the earth falls entirely across the moon – typically less than once each year. (If you were standing on the moon looking at Earth, you would see a total eclipse of the sun.) Since the full moon appears much less bright during a lunar eclipse, it also is easier to see stars that may not be as visible at other times.

The Super Blood Wolf Moon Lunar Eclipse will be a rare coincidence when these three kinds of moons occur together. A Wolf moon is the year’s first full moon, named because hungry wolves often howled at that time of year. A Super moon occurs when the moon is near its closest point from Earth during the month, making it appearing slightly bigger than usual. A Blood moon is named for the red glow created when the shadow of the Earth eclipses the moon. The earth’s atmosphere refracts the sun’s rays so that shorter wavelengths of light (blues and yellows) are absorbed into the earth’s atmosphere while longer wavelengths (red and orange) fall on the moon. For more information about the eclipse, visit The supermoon eclipse of January 20-21 by Bruce McClure at earthsky.org.

Sunday evening, January 20, 3019, imagine enjoying a great brew and some casual fare at The Turkey Hill Brewing Company Pub & Grille. Entertainment that evening will be Tanner Bingaman performing his unique musical style that combines folk, blues, bluegrass, and more. Then get ready to stargaze and watch the Super Blood Wolf Moon Eclipse (howling optional) until you’re ready to retire to your warm cozy room at the Inn. Monday morning, awake to a delicious gourmet breakfast as you start your day! Just give us a call at (570) 387-1500,or go online to reserve a super getaway for the lunar eclipse.

Images by Claudio Testa on UnSplash